前期出版
前期出版
頁數：49﹣99 新媒體下的創意：如何在逆境中突圍而出 Creativity in New Media: How to Turn Adversity Into Opportunity
研究論文
Download get_app
作者(中)
陳頴琳 、裴浩輝
作者(英)
Wendy Chan Wing Lam, Pui Ho Fai, Fred
關鍵詞(中)
記者、媒體創意、新媒體、新聞專業、新聞學
關鍵詞(英)
journalism, journalistic creativity, journalists, media creativity, new media
中文摘要
在現今社會中，媒體業的表達模式以及生態各異，於資訊爆炸的年代，要得到大眾眼球並不容易，甚至要躋身在大數據下的前數名，讓社交媒體排名中名列前茅，更是難於登天，這讓媒體創意變得更為重要。媒體創意於這研究的剖析將會分兩部分︰第一，在新媒體下，究竟是什麼「環境因素」讓媒體人花更多精力在創意上？第二，新媒體發布的內容與傳統媒體的創意有哪些差別與相同。這項研究所有的訪問都是在2020年下半年進行，受訪的人物大致劃分為三類：第一類是業界翹楚，在業界有五至十年或以上的工作經驗；第二類是屢獲國際新聞獎項的業界精英；第三類是年輕媒體人，並同時擁有傳統及網上媒體工作經驗的新一代媒體人。受訪者的工作經驗都能對媒體創意提供厚實的看法，從相對有經驗的到獲獎的年輕記者，甚至在前線拼搏的媒體人，他們親身的體會及講解可以讓媒體創意這個詞語變得更為圓潤，而非紙上談兵。我們透過這次研究，剖析如何推進新聞媒體創意的概念，從而透視創意在新聞媒體中的方向。
英文摘要
The models and ecology of the media industry are different in today’s society, as it is not easy to grab the public’s attention. It is even harder to get people in big data era to make the first few items of social media their own content, thus pushing media creativity to greater importance. The analysis of media creativity in this research falls into two parts. First, under the new media era, this study aims to find out the environmental factors that make media practitioners gradually turn to use creativity. Second, we delve into if and how creativity takes different forms under new media and traditional media. All interviews for this study were conducted in the second half of 2020, and the interviewees can be roughly divided into three groups. The first group is leaders in the industry who have 5 to 10 years or more of work experience in the media industry. The second group covers those who are awardees and who have been recognized at international competitions. The third group is young journalists who work in traditional and online media. From relatively experienced young journalists to award-winning journalists and even frontline media professionals, their experiences form a more rounded version of the term media creativity. This research analyzes the advancement of the creative concept of news media, so as to see the direction of the development of creativity in news media.

The findings indicate that the three key aspects that foster journalists’ creativity are individuals, society, and the workplace environment, which are emphasized throughout this article. The interviewees note the ability for the new generation of journalists to interview and write independently. Journalists’ competences in applied technology, knowledge of using new media, and their professional knowledge are all crucial. At the same time, if the media’s management lacks the mentality to embrace new technology, then it will restrict reporters’ incentive for embarking on creativity.

The environment in the new media era is, on the other hand, extremely competitive, because there are several channels for the general public to access information. Media professionals must first consider why the general public would find certain content interesting. In order to engage readers, practitioners need to find intriguing ways to provide uninteresting news in a manner that is simple to understand. At the same time, the new media environment offers social media platforms, numerous new tools, and applications that are simple to use. The reporters’ creative capability is made simpler by all of these factors.

The 15 interviewees feel that their work environment, including the company’s culture, resources, and encouragement of innovation, is highly essential to them. Hong Kong’s conventional media have been reluctant to change, as it is not possible to instantly upgrade this working model, which has been in use for decades. In recent years, the working atmosphere at news companies has also gotten worse. The economic crisis has had an impact on many of Hong Kong’s traditional news outlets, and there is not much money available to invest in new technologies or give journalists the tools they need to express their creativity. They are thus unable to properly express their creativity, despite the presence of others and the encouragement of their social surroundings.

The interactions among people, society, and the workplace are also beneficial for media innovation. The interviewees reveal how important the three are, because society as a whole is still reliant on new media. It is also simpler for everyone to be creative with technology, which might draw people’s attention and bring more people to a news platform. To boost sales of their advertisements, media companies need to generate the traffic. Naturally, additional resources are allocated to media innovation.

For media practitioners, the new media is just a platform. Everyone is trying to convert the advantages of the platform into their own advantages, but it is easy to talk about it than successfully doing it. This article also points out that although a small number of media practitioners still resists the word “creativity”, some respondents confirm the existence and application of creativity, in the hope of bringing out the importance of the word “creativity” to the field of media through this research. This study identifies six key factors that affect whether journalists will apply creativity in their work: the ever-changing needs of information by society; the industry’s transformation; the career aspirations of media practitioners; the resources given by a company; pressure within a company; and fulfilling readers’ expectation. These key factors could further be included into a future quantitative study to test the correlations and interactions between each factor and also the dependent factor of media creativity.
204次下載
2022/ 夏
No.52 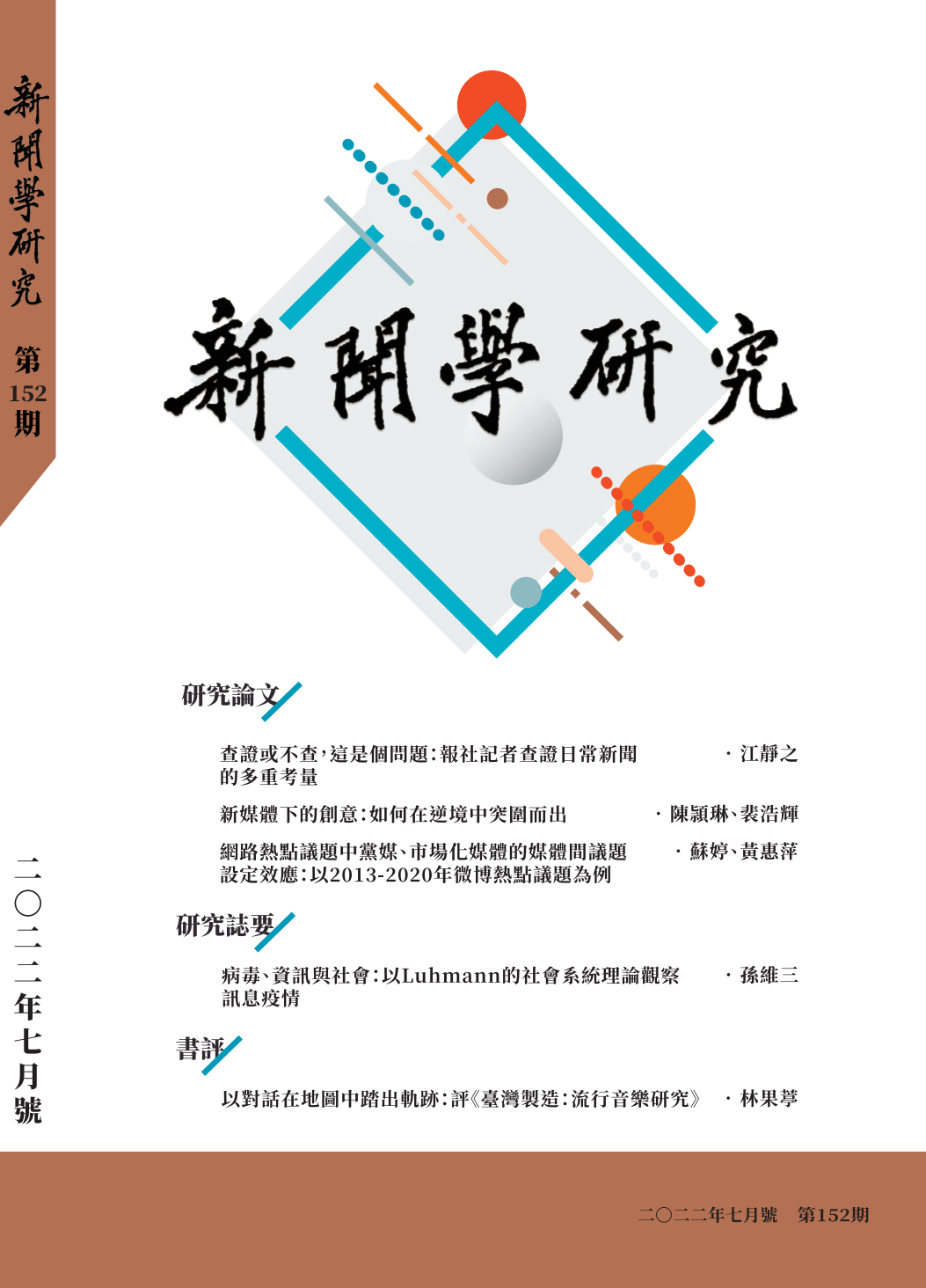