前期出版
前期出版
頁數：1﹣54 臺灣能源轉型爭議論述的媒體建構： 減碳、非核家園與空污防制的風險傳播多重難題 Media Construction of Controversial Discourse in the Process of Energy Transition: Dilemmas of Risk Communication Among Carbon Emission Reduction, Nuclear-Free Homeland, and Air Pollution Control in Taiwan
研究論文
Download get_app
作者(中)
徐美苓
作者(英)
Mei-Ling Hsu
關鍵詞(中)
空氣污染防制、非核家園、風險傳播、能源轉型、減碳、新聞框架
關鍵詞(英)
Air pollution control, nuclear-free homeland, news framing, energy transition, carbon emission reduction
中文摘要
本研究以同時涉及因應氣候變遷的減碳、非核家園推動及空氣污染防制等問題論述為分析對象，探討臺灣在能源轉型過程中，作為科技風險議題建構主要場域的新聞媒體如何再現上述爭議論述及新聞工作者所扮演的角色。透過量化內容分析四家主流與四家另類媒體563則相關新聞文本，及質化深度訪談七位曾採訪相關議題的媒體記者，本研究發現不論是提及何種能源或何種選擇的目的，能源供應或穩定的優先考量是新聞中最常被提及的。其次，相對於其他傳統或再生能源彼此間會互相提及，核能論述自成一系統。除此，多數媒體均以「政治治理評價」框架占比最高；新聞引述的消息來源則多為政府單位或個人與非政府之議題相關團體或個人，媒體在消息來源的選擇上會避免知識類型的學者專家。若以同一媒體整日所有報導論述作為分析單位，多數媒體以單一傾向立場為最高，受訪記者針對上述新聞內容分析結果也提出了新聞實務操作上的解釋與理由。本研究成果期能提供學術與媒體實務界進一步挖掘科技風險傳播的重要問題所在，俾使媒體在促進公眾理解與參與議題上能發揮更有效的成果。
英文摘要
Climate change can be said to be the most serious ecological problem faced by human beings in the 21st century and is also an important issue concerning global technological risks. Countries around the world have put forward policies on how to face, mitigate, and adapt to climate change from the individual, social, national, and international levels. The development of renewable energy is thus one effective action strategy that can replace traditional energy sources such as coal, gasoline, and natural gas. With the emphasis on issues related to climate change and renewable energy, the process of energy transformation has also started. The policy context of Taiwan’s energy transformation traces back to the first energy conference held in 1998, but the official legal source is the Renewable Energy Development Regulations promulgated and implemented on July 8, 2009, in which wind energy and solar photovoltaics are listed as priorities for the promotion of renewable energy. Ever since Tsai Ing-wen and the Democratic Progressive Party government took office in 2016, it has established the goal of moving towards a nuclear-free homeland by 2025.

Taiwan intends to achieve an energy transition goal of 20% renewable energy by 2025, but whether this can be reached in time remains questionable. The proportion of fossil fuels used in Taiwan by 2020 and their impact on society also become a test of the effectiveness of energy transition. Therefore, one of the purposes of this research is to examine and thoroughly review the discourse construction of important aspects of this transformation period.

Renewable energy development also involves issues such as land acquisition and impact on the environment and ecology, making nuclear power an unavoidable main competitor in the discussion of alternative energy options. The two are hotly debated in public forums in Taiwan and have also increased the frequency of mass media discussions. With the ups and downs of visibility in different aspects of nuclear power in public discourse, public trust in the government’s ability to promote renewable energy development is not high. As a result, support for nuclear power has fluctuated, and the role of the media in reproducing public discourse cannot be ignored.

This study explores how news discourse and related mechanisms have contributed to media framing and representation by using the problem of risk communication among carbon emission reduction, promotion of a nuclear-free homeland, and air pollution control in Taiwan’s energy transition process. The study also examines journalists’ news framing and how newsroom practice, organizational cultures, and other factors have affected their cognitive frames in news judgments.
The major theoretical concepts and frameworks adopted in the study include social construction, media framing, and factors affecting media framing such as journalistic routines, news sources, features of science reporting, and so on.
The data collection method in the study is both quantitative and qualitative. It includes a content analysis of relevant news stories from four mainstream and four alternative press media as well as personal in-depth interviews with seven journalists involved in the news coverage. Content analysis was conducted on news articles addressing energy transition published after the referendum on November 25, 2018, and ended when the research began on April 30, 2019. In total, 563 news articles were collected of which 65 of them were pre-tested. Two coders who received a master’s degree in communication participated in the pre-test, which yielded Scott’s ℼ = .873. The reliability of each item was calculated and was mostly between .7 and 1.0.

The study first finds that no matter what kind of energy or purpose of choice, the priority of energy supply or stability is the most frequently mentioned topic in the news. Second, compared with other traditional or renewable energy sources that have mutually mentioned each other in the news, nuclear energy has developed into a self-sufficient discourse. In addition, the most dominant news frame in the media is “political governance and evaluation”. The quoted news sources are mostly government units or individuals and non-government issue-related groups or individuals. The media tend to avoid using scholars and experts as news sources. When all the news stories of the same media throughout the day are used as the unit of analysis, a one-sided position is the most predominant. The interviewed journalists also put forward explanations for news practice in response to the above-mentioned analysis of the news contents.

The results of this study help academia and media practitioners to further explore the important issues of scientific and technological risk communication so that the media can play more effective roles in promoting public understanding and participation in related issues. Academically, future research can compare constant controversies related to different referendums in the energy transition process. For example, follow-up research can compare the results of this study with the analysis of news discourse on the Taoyuan Algae Reef Referendum in 2021 to identify the similarities and differences between the roles of the media, stakeholders (sources), issue experts, and technological risk policy communication.

At the application level, efforts can be made to strengthen the cultivation of citizens or audiences and to call for and urge the establishment of related mechanisms. It is hoped through the improvement of the literacy of the media and energy issues that the media can present the issue of energy transition in a more issue-oriented and in-depth manner.
154次下載
2023/ 冬
No.154 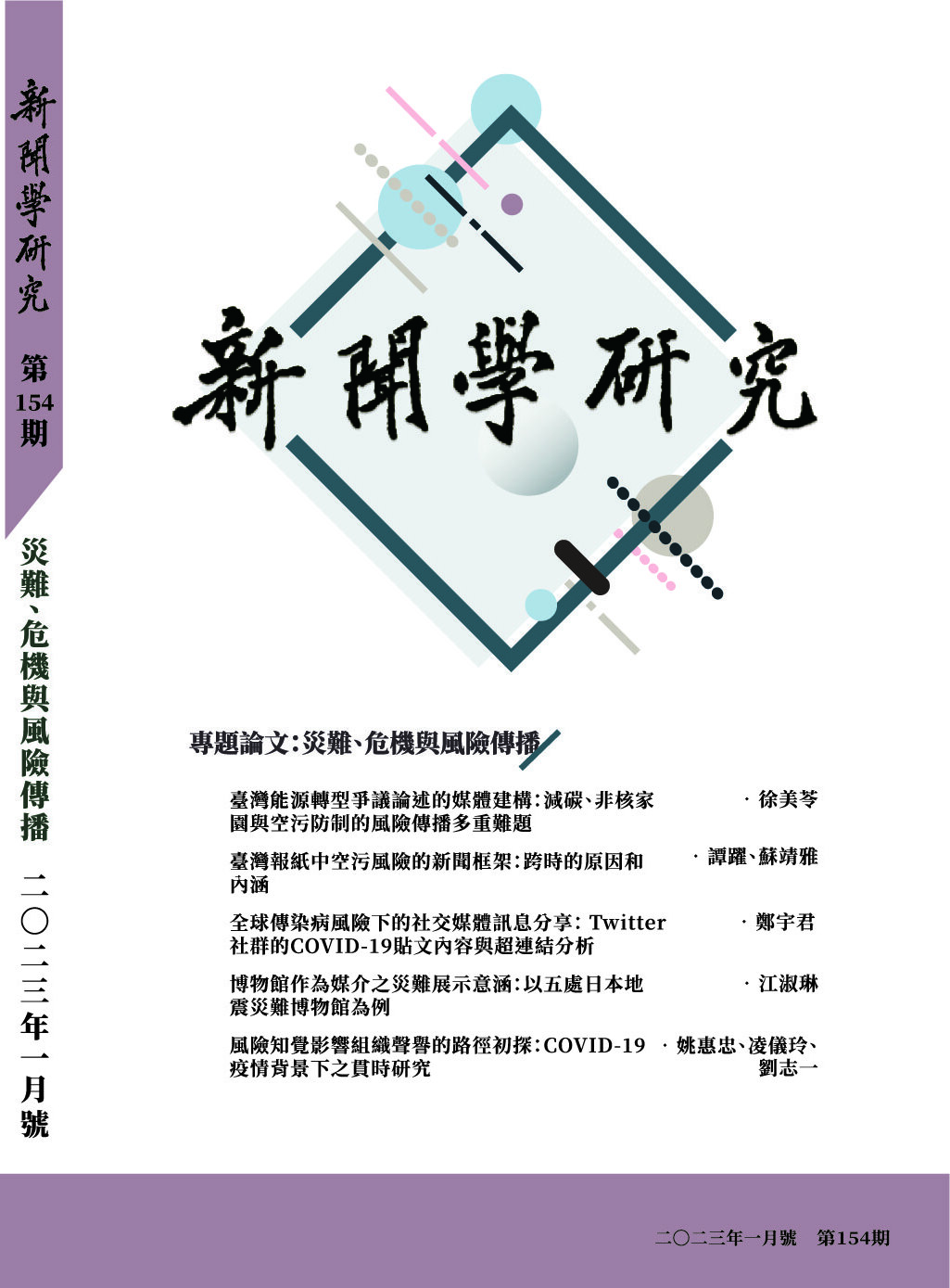