前期出版
前期出版
頁數：47﹣92 染血的新聞自由？探索菲律賓總統杜特蒂主政下記者遭殺害問題 Bloodied Press Freedom? Exploring the Killing of Journalists in Duterte’s Philippines
研究論文
Download get_app
作者(中)
張春炎
作者(英)
Chunyen Chang
關鍵詞(中)
杜特蒂、記者安全、菲律賓、新聞自由、新聞壓迫
關鍵詞(英)
Duterte, journalist safety, Philippines, press freedom, press repression
中文摘要
2021年諾貝爾和平獎頒發給菲律賓網路新聞Rappler創辦人──瑪麗亞．瑞薩（Maria Ressa），使臺灣開始關注到杜特蒂（Duterte）政府對其壓迫，以及菲律賓新聞自由的黑暗面。根據國際記者聯盟（IFJ）的調查報告，菲律賓長期以來就被視為是具致命危機的新聞採訪環境。有鑑於杜特蒂上任以來，即高度使用暴力讓菲律賓的民主染血。由此形成本研究問題，究竟被直指為血腥強權的杜特蒂，在其主政下的菲律賓記者遭殺害問題是否陷入更為嚴重的情況？本文運用保護記者委員會（CPJ）的全球有罪不罰（impunity）指數統計、記者遭暴力攻擊統計資料庫（database of attacks on the press），分析比較各任總統的表現。本研究發現，杜特蒂作為強人總統，改變了菲律賓弱中央、強地方的政治結構。過去研究指出，「地方記者殺害問題」應歸咎於地方威權。然而這樣的解釋，到了杜特蒂總統任內則不再符合現實脈絡。一旦強人總統形成具威權的中央政府，那麼總統的權力就可以觸及地方。在這樣的新菲律賓政治結構下，地方的反民主作為則關係到總統的責任。本文主張杜特蒂確實必須為第四權的染血，付起執政者應有的關鍵責任。
英文摘要
Nobel Peace Prize laureate 2021 Maria Ressa, the founder of Rappler that is a Fillipino online news site, attracted people’s attention in Taiwan due to then-President Duterte’s oppression and the dark side of press freedom in the Philippines. Journalists’ personal safety is an important research topic and is even followed closely by international organizations. Based on the investigated report by International Federation of Journalists (IFJ), the Philippines is one country where press investigative reporters have been facing crises recently, because Duterte has “blood-stained” the democracy there by his violence ever since he assumed office. Therefore, a research question arises: Is the problem of journalists killed mired in a more serious situation under the Duterte administration? The Global Impunity Index from Committee to Protect Journalists (CPJ) and CPJ's database of attacks on the press are analyzed to compare the relevant performances of each president of the Philippines in the post-Marcos era.

There are three sections in this study for the literature review. “Press oppression and journalists killed violently” is first discussed. The present research indicates that reporters or journalists have always played essential roles in a democratic society. However, the reality is that the authority interferes in press freedom by all kinds of means to prevent the media watch from accomplishing his political and group/personal interests. Press oppression is a systematic attack on journalism and journalists, harming their personal safety, rights of freedom, and professional autonomy. Though killing journalists can be viewed as type of press oppression, relevant research considers that the problem of journalists being killed has existed during the post-Marcos era due to the reflection of a larger structural problem - that is to say, “impunity” is allowed, which results in journalists killed.

The second topic discussed is “impunity and the problem of journalists killed”. “Impunity” is believed to be the main reason for journalists around the world being in danger. Related research based on impunity points out that journalists being killed is a continuous social problem, because of similar crimes that cannot be contained effectively by relevant laws. Thus, it is supposed that national society can offer effective remedies for victims to assure them of compensation only when the impunity problem is discarded, and the government should also take necessary measures to prevent violence from happening again. From this viewpoint, the more the impunity happens, the more serious the problem of journalists being killed is in a country. Therefore, the first research question, forming the basis of this study, is how the impunity situation of journalists being killed under the Duterte administration runs in contrast with other Filipino presidents in the post-Marcos era. And the second research question is how judicial quality under the Duterte administration is in contrast with other Filipino presidents in the post-Marcos era.

Past research has indicated the problem of local journalists killed being blamed on the local authority. Abinales & Amoroso (2017), Filipino scholars, also noted that Cacique Democracy, which denotes local politics predominated by local despots, was still deep-rooted even when Aquino III came to power. However, this argument no longer fits in with the context of reality under the Duterte administration. Duterte reconstructed the power connection between central and local governments with his strongman politics, and the relationships between the president’s executive power, legislative power, judicial power, and the Fourth Estate become out of balance.

Once the strongman president formed an authoritative central government, the power stretched out into local governments. Under this new Philippine political structure, local anti-democratic behaviors were tied with the president’s responsibilities. Therefore, by objective data analysis and an explanation of the relation between central and local governments under the Duterte administration, this study shows that Duterte, as the ruler, should bear critical responsibility for the blood-stained fourth power.
131次下載
2022/ 秋
No.153 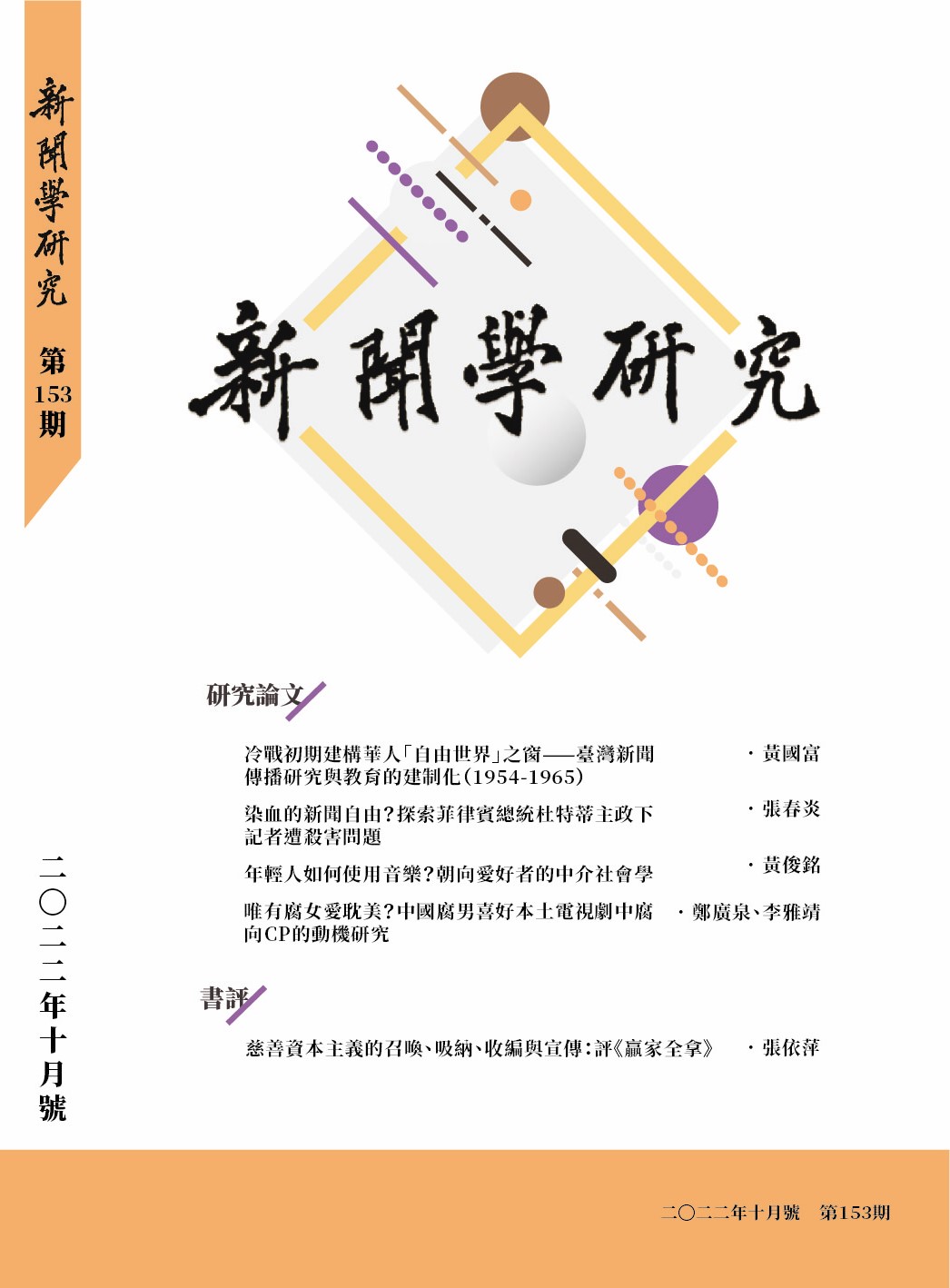