前期出版
前期出版
頁數：43﹣110 進行一場游擊戰：政治檔案中的黨外雜誌 Fighting Like a Guerrilla: Dangwai Magazines in Political Archives Abstraction
研究論文
Download get_app
作者(中)
黃順星
作者(英)
Shun-Shing Huang
關鍵詞(中)
白色恐怖、另類媒介、游擊媒介、新聞自由、傳播迴路、黨外雜誌
關鍵詞(英)
alternative media, communications circuit, Dangwai magazines, freedom of the press, guerrilla media, white terror
中文摘要
自2002年《檔案法》實施後，檔案管理局陸續蒐集到由情治機構，透過佈建線民針對黨外雜誌所建立的監控資料。這些政治檔案的目的在提早獲悉雜誌內容、確認文稿供應者及掌握出版生產黨外雜誌的業者，不但擴大監控網路也以便查禁。但在監控的意圖下，這批檔案意外地留下不少黨外雜誌的生產細節。本文以R. Darnton的傳播迴路為分析架構，將黨外雜誌視為歷經漫長生產流程後產出的成品，藉此分析這批政治檔案的意義。本文不將研究焦點放在黨外雜誌的言論內容或政治立場，因為任何言論主張都必須以媒介承載內容，捨棄媒介僅論內容將有失偏頗。另一方面，過度偏重內容不但流於個人英雄主義，也無視突破黨國體制的言論箝制，是由眾多雜誌產銷線上的無名黑手共同突破的事實。藉由執行查禁書刊工作的警總文化工作小組：「挖根、砍根、掃葉」的工作原則，說明文化工作小組如何在印製、裝訂的過程時「挖根」、在雜誌成冊運輸配銷時「砍根、掃葉」，滴水不漏地防止三合一敵人的思想毒素傳染蔓延。
英文摘要
Previous studies on Dangwai (non-Kuomintang) magazines can be divided into two categories: 1) verification of their political stance by analyzing the remarks of the magazines; and 2) an exploration of how Dangwai magazines promoted the development of Taiwan’s democratization. However, researchers have always overlooked the fact that Dangwai magazines were printed publications that need circulated and sold in the market. The content of any opinions and propositions had to be carried by the media; thus, solely discussing the content without examining the media appears biased. Moreover, analyses with an excessive focus on content merely present heroism, while ignoring the fact that the speech restraint that transcended the party-state system was overcome by numerous unsung heroes in the production of Dangwai magazines.

The scholars argued that during the martial law period, intelligence units such as the Taiwan garrison command wantonly banned Dangwai magazines in order to hinder readers from purchasing such magazines, thereby preventing the dissemination of non-Kuomintang information. The inability of readers to access actual publications obstructed the spread and influence of radical speech and truth in the communication network, in turn rendering them incapable of swaying the readers’ and voters’ political intention and urging them to take action. Following the implementation of the Archives Act in 2002, the National Archives Administration has continuously acquired surveillance data targeting Dangwai magazines created by intelligence agencies through the deployment of informants. The purposes of these political archives are to learn the contents of the magazines in advance, verify the authors’ identities, and identify the operators involved in the production and publication of Dangwai magazines, enabling the government to expand its monitoring network and ban such magazines. Nevertheless, despite their original objectives in monitoring, these archives inadvertently left behind various details on the production of Dangwai magazines.

This study employs the communication circuit by Darnton as the analytical framework, in which Dangwai magazines were regarded as the products of a long production process, thereby serving as the analysis basis for this batch of political archives. The production process of Dangwai magazines was not merely the materialization of ideas; it also involved labor production that required time, space, and considerable physical effort. By focusing on the working principle of “digging roots, cutting roots, and sweeping leaves” of the Taiwan garrison command, this study explains how the Taiwan garrison command conducted its banning operations. To ensure the successful banning of magazines, the Taiwan garrison command first adopted various methods to ambush informants in the targeted magazines and identify in advance details such as the content and authorship of the magazines, the location of their printing sites, their distribution channels, and the revenue of each issue. In addition to planting informants to acquire intelligence information, intelligence units also obtained relevant information through approaches such as monitoring telephone calls and intercepting fax information. The Taiwan garrison command could only conduct seizure operations at the magazine production sites, such as the plate making plants, printing plants, and binding factories after securing the aforementioned information. In order to ensure a watertight censorship of Dangwai magazines, the Taiwan garrison command also seized the vehicles transporting such magazines by establishing random checkpoints or standing guard outside retail bookstores to deter readers from making purchases.

In response to the omnipresent official surveillance and banning operations, Dangwai magazines developed various guerrilla tactics to break through the government’s blockade. These included applying for multiple magazine registration certificates simultaneously to ensure the capacity to quickly publish another new magazine when one of the magazines was ordered to suspend publication; using multiple printing methods to reduce the number of magazines seized and ensure timely publication; and hand-delivering the magazines directly to the subscribers to break through the blockage of retail channels. The endeavors of these news workers in production and distribution who responded to the official censorship in a flexible way enabled Dangwai magazines to overcome the blockade and reach the readers, who were subsequently able to read and disseminate non nationalist information. The numerous surveillance archives and the evolution of censorship policies in the martial law era indicated that the authorities no longer targeted the authors, but rather a production line of Dangwai magazines to eliminate the source of ideologies. This exclusive production line outside the party developed into a strong and profitable industrial chain of Dangwai magazines around 1985. Through this exclusive production line, Dangwai magazines were able to engage in a guerrilla warfare against the party-state system while obtaining funds and readers from it.

The authorities mobilized a large number of soldiers, police officers, and secret agents to wipe out Dangwai magazines in 1985, resulting in a banning rate of such magazines of up to 75.38%. The heavy financial losses suffered by the magazines led to operational difficulties and forced many of them to end their publications. Eventually, approximately only one issue of weekly magazine could be legally published every month. Thus, “breaking through speech regulation and striving for complete freedom of speech” depended not on the wisdom of the literati, but on the guerrilla tactics that consisted of ubiquitous, joint actions from upstream, midstream, and downstream operators, as well as on anonymous news workers in typesetting, printing, transportation, and retail. These combined efforts turned taboo speech, which was regarded as an ideological poison by the party-state system, into magazines that could be read and disseminated among the people. The aforementioned individuals were the behind-the-scene manipulators who were overlooked in previous studies, but had in fact influenced the survival of Dangwai magazines and their expression of opinions.
114次下載
2022/ 夏
No.51 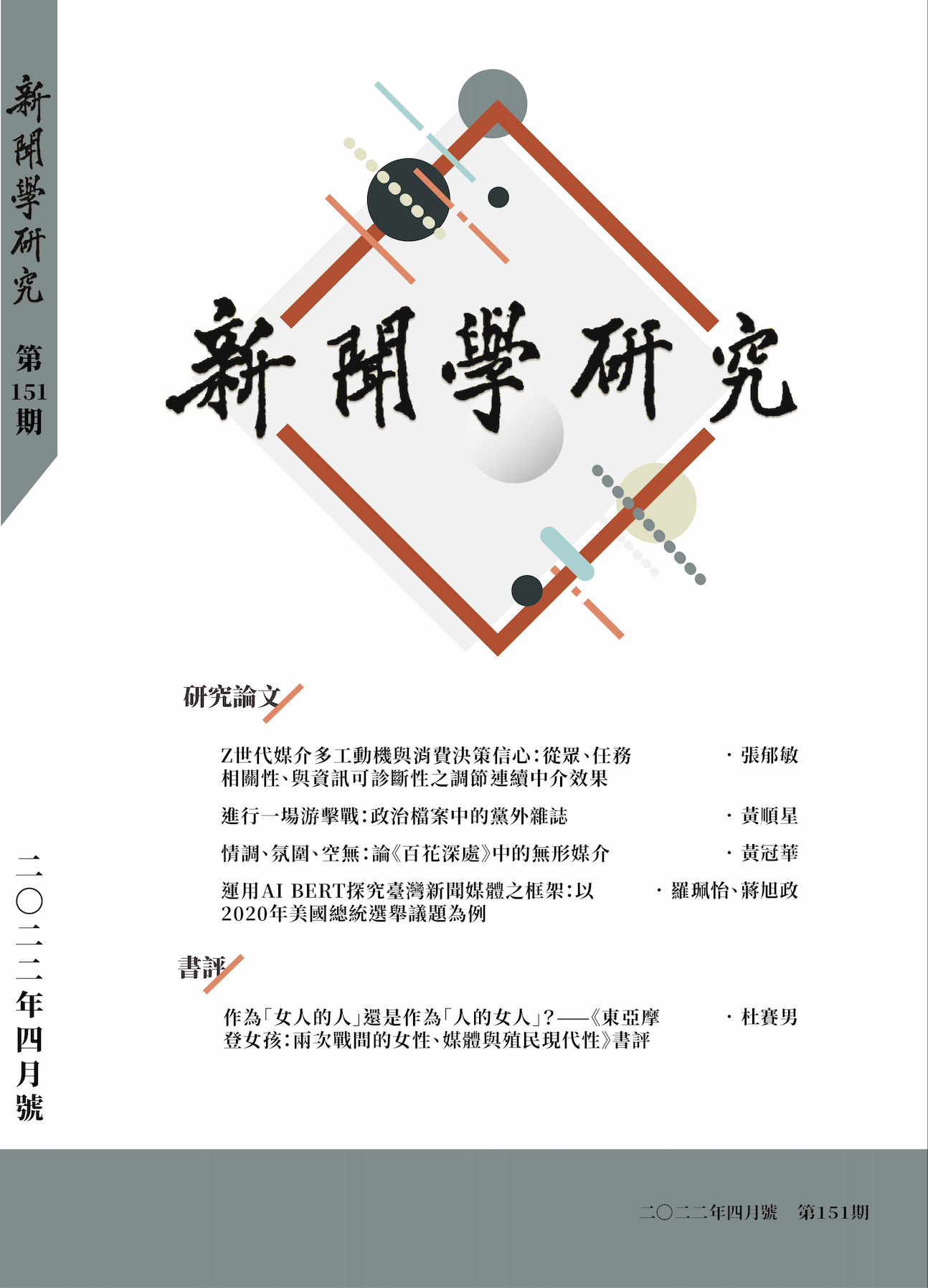