前期出版
前期出版
頁數：149-200﹣149-200 命運與離奇傳播： 論拉岡精神分析理論的「傳播」概念 Fate and Uncanny Communication: On the Concept of “Communication” in Lacan’s Psychoanalytical Theories
研究論文
Download get_app
作者(中)
張維元
作者(英)
Wei-Yuan Chang
關鍵詞(中)
佛洛伊德、拉岡、媒介理論、傳播理論、精神分析、離奇
關鍵詞(英)
communication theory, Freud, Lacan, media theory, psychoanalysis, uncanny
中文摘要
本文跟隨雅克．拉岡（Jacques Lacan）所給出的線索，通過分析西格蒙特．佛洛伊德（Sigmund Freud）對神祕主義的討論，來對拉岡精神分析理論（Lacanian Psychoanalytical Theories）中的「傳播」概念進行分析性的梳理與探索性的建構。本文認為，拉岡的「傳播」概念所關注的，是「傳播」在觸及並撼動主體時，於主體感知中所呈現出充滿「離奇」（uncanny）色彩的「中介結構」（structure of mediation），及此一中介結構的運作核心、基礎結構與運作機制。此一離奇中介結構的特殊性在於，它可將各式媒介刺激，都接收與轉化為神諭般的訊息，並由此使主體在進行傳播活動的過程中，生產出與「命運」（fate）發生遭遇的幻想。這個「離奇傳播」面向既是人類傳播活動之「傳播的重量」所在之處，也是「意義建構與共享」和「資訊傳遞與交換」的一般性人類傳播活動，所必須全力壓抑，但又不可能擺脫的「幽靈化底層」。
英文摘要
Jacques Lacan noted that if we want to understand his concept of “communication,” then we need to pay close attention to Sigmund Freud’s discussions on occultism. This article thus attempts to follow this clue faithfully. By analyzing occultist examples drawn from Freud’s work, I argue that the focal concerns of Lacan’s discussions on “communication” lie in the “uncanny structure of mediation” that unfolds in the subject’s perception at the moment when “communication” deeply affects the subject. The “uncanniness” of this particular “structure of mediation” resides in its ability to receive and transform all kinds of “stimulations” into oracular “messages.” It is through this mode of reception and transformation that the fantasies of “encountering fate” are generated on the side of the subject during the process of communication. In other words, “fate” is an inevitable product of the “uncanny (dimension of) communication.”

The “uncanny” dimension of communication is rooted in Lacan’s logic of signifier. The major importance of Lacan’s various discussions on “signifier” does not reside in the signifier in-itself, but rather the “void” opened by the signifier and situated beneath it. It is this void that “calls” for other signifiers to fill in, through which an unstable structural chain of signifiers can be articulated into “meaning effect”. In addition, because these other signifiers that come to fill in the void can never be the one single signifier that opens the void, this void can never be totally concealed. This indestructible void not only is the element that constantly threatens the stability of signifiers’ chain-structure, but more importantly it also has the potentiality to reshuffle the established chain-structure. In other words, this “void” is the constitutive “motor” that activates signifiers’ articulation, de-articulation, and re-articulation dynamics. Moreover, this dynamic has made this void an extra-flexible, infinitely expandable, and ultra-sensitive hole that can capture all other signifiers. This article demonstrates that this “void” resides both in the transmission side of the uncanny communication, which is the Other, and that of the reception side, which is the subject. It is the gravity zone formed between these two voids that allows the transformation of “stimulations” into fateful “messages.”

Lacan emphasizes that the principal “interlocutor” of the communicative subject is not the other, but rather the communication system as a whole, which is constituted by signifiers through which a void will always insist within it, making this system an essentially opaque totality. It is this ambiguous system that decides the final meanings and outcomes of the subject’s communicative actions, when the subject is incapable of fully grasping how this system works. As a result of this ambiguity, the subject tends to fantasize a transcendental entity situated beyond this system that can provide this system with a minimal consistency. This transcendental and fantasmatic entity is the Lacanian Other.

For Lacan this Other is the only true “interlocutor” of the subject, and the void situated in the midst of this ambiguous communication system symbolizes the “mouth” of the Other. This constitutes one side of picture of the uncanny communication - namely, when engaging in communicative practices, the subject is an anxious subject who stands before the Other and waits for “it” to announce its statements. The Other is usually hidden behind the scene of communication and shows itself only when the response or message sent beck from the ambiguous communication system deeply “hits” the subject. When this “hit” occurs, the subject will experience the empirical other who really talks or writes to him as nothing more than a “channel” or “messenger” through which the Other’s oracular “message” is delivered.

The subject necessarily situates on the side of reception in uncanny communication. It is widely known that the Lacanian subject is a subject made from memory traces that are signifiers. However, the most significant point here is not that the subject is constructed by signifiers, but rather voids or holes that are opened in the subject by these signifiers. In other words, what the Lacanian “subject of signifiers” really means is the following - “memory traces/signifiers” inscribed on the subject open or create multiple voids on the subject through which a “porous” subject is constituted. As the Other is normally hidden from view, these “holes” are usually closed, too. They will become “open” only when the subject puts strong doses of affect investments upon them. When these “holes” open, they are not simply any kind of “openings”, but rather “openings” towards the Other, which means that they are the receptive accesses that take in the Other’s “messages.”

By ways of analyzing several of Freud’s occultist examples, this article looks to demonstrate that the “void(s) of the subject” and the “void of the Other” constitute a kind of gravity zone or “resonance tube” that elevates literally all “stimulations” entering into it into the status of the Other’s oracular “messages,” whether as omens, fatal messages, or miraculous gifts of love. It is precisely this uncanny “structure of mediation” that underlies our ecstatic experiences when we encounter media products that make a deep “impact” upon us. These media products can contain an “other-worldly” and “unnamable” aura for us (that sometimes can even make us exclaim “this is IT!), because they have been fantasmatically perceived as sent from the Other - that is, our encounters with them will be experienced as “fate” or “destiny.” This fantasmatically fateful feeling is, firstly, where the “weight of communication” resides and, secondly, the target of the “meaningful” and the “informational” communications’ repressions. These repressions are attempts to maintain a minimally “normal” and functional human communication.

The “meaning making” dimension of communication functions, on the one hand, as a “productive” repression to the “uncanny communication.” In this “productive” repression, the subject can partially unload the unnamable, uncanny impacts by articulating them into discourses shared within the intersubjective networks through which the established, common intersubjective discourses can constantly reinvigorate themselves. Nevertheless, this “unloading” can never exhaust the uncanny impact and as a result of this inexhaustibility, vortices of renovations will keep “insist[ing]” on the intersubjective, discursive networks.

The dimension of “information exchange” of communication works, on the other hand, as an “evasive” repression to the “uncanny communication” by displacing the unnamable impacts and the followed-up meaning-making practices onto the “idiotic” others through which the purely informational subject can evacuate himself from the uncanny dimension of communication. Nevertheless, since the voids on the subject can never be concealed permanently, the uncanny impact will eventually “hit” this purely informational subject. When this “hit” finally arrives, the subject will suffer even stronger senses of uncanny and anxiety. This is what Lacan means when he says that “the letter always arrives at its destination.” In other words, the “porous” subject can never escape from the delivery range of the Other’s “message.” 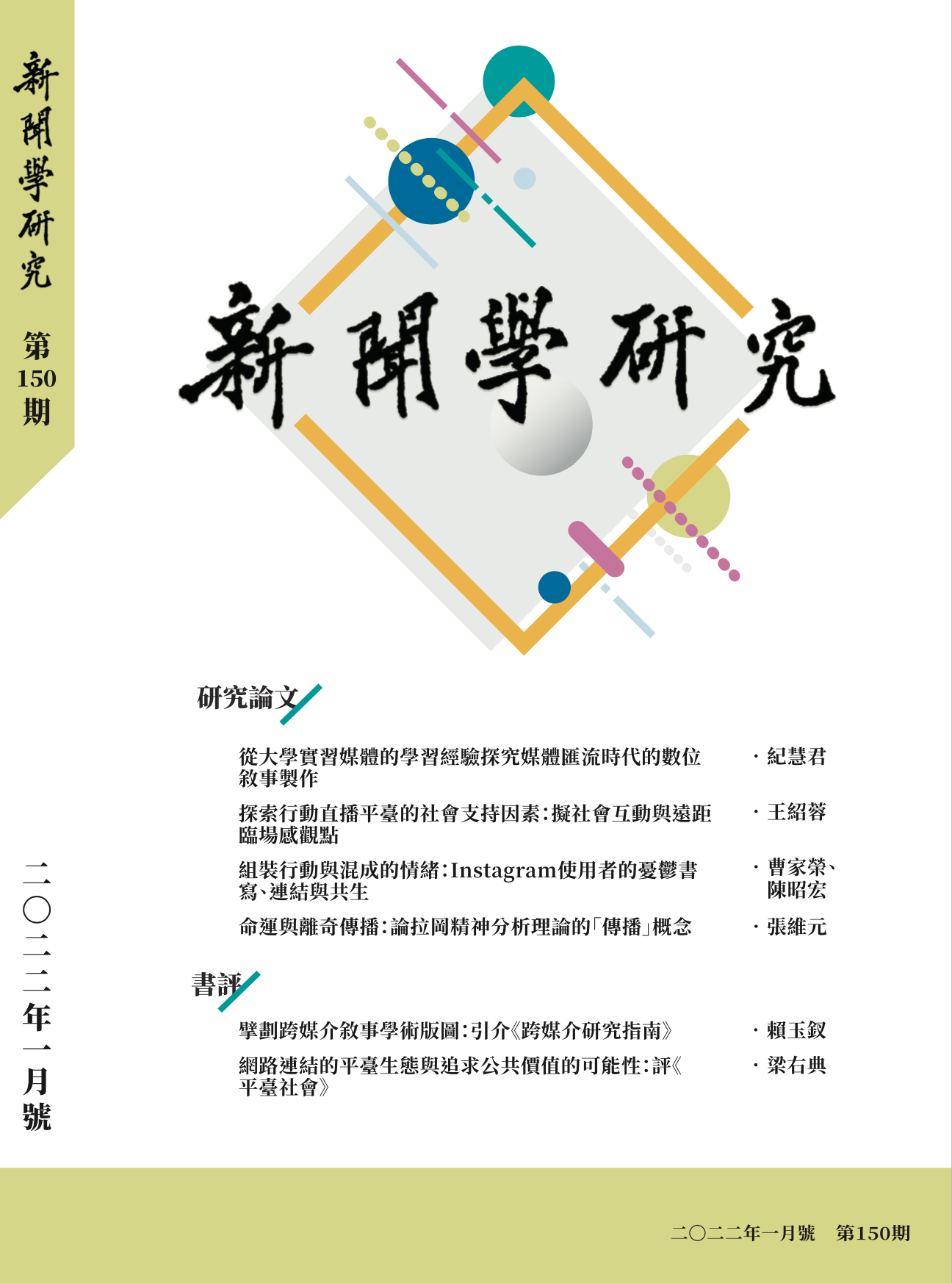